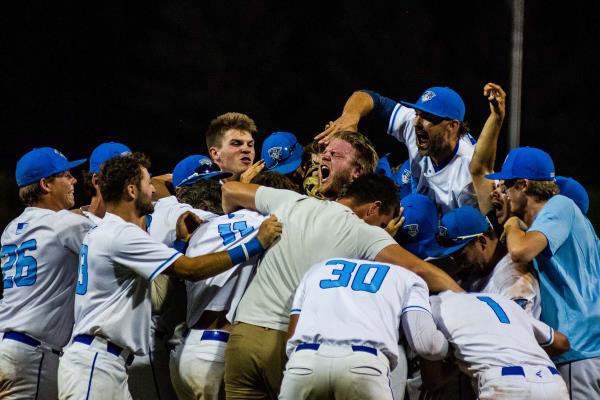 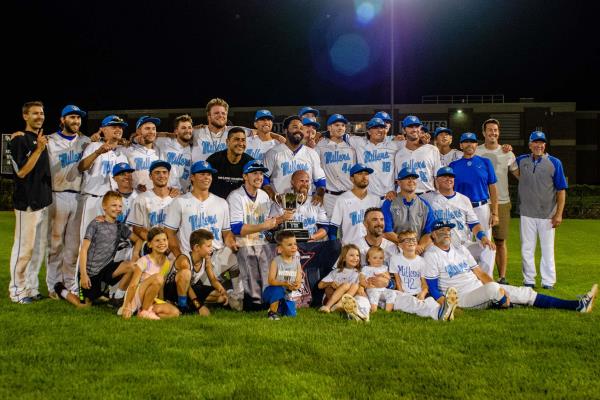 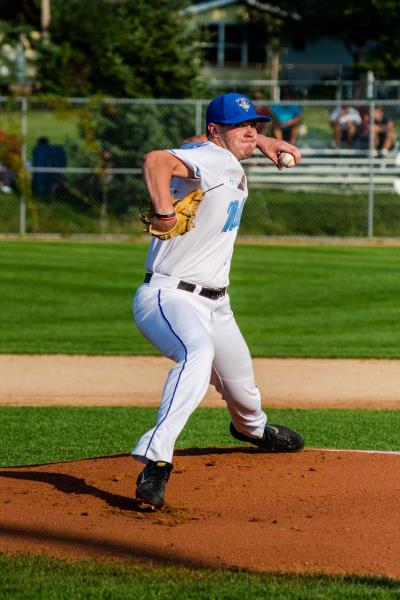 Class A championship: Millers back on top, pay back Cobras to win 15th title
Posted on Aug 23, 2020

If ever there was going to be a year to see some chaos in the Class A State Tournament, perhaps 2020 was it.

COVID-19 threw the season a metaphorical curveball, and changed the format of the state tournament to pool play, followed by a single-elimination, 16-team bracket, rather than the double-elimination bracket that the teams were used to.

So of course, in a weird season and in a tournament with no margin for error, it was the Minnetonka Millers hoisting the trophy at the end — again, for the 15th time.

The Millers won a classic of a game, in a rematch of the 2019 championship, this time topping the Minneapolis Cobras 9-6 Sunday at Palm Field in St. Anthony. The Millers hit three home runs in the first three innings, and got gutty efforts from pitchers Tom Skoro and David Cushing.

Since winning three in a row from 1997-99, the Millers haven’t gone more than two seasons without a Class A title.

“We hadn’t gone three [without winning] since 1997. So that’s a long time,” Minnetonka manager Kevin Hoy said. “It was good. For me, it’s just… it’s a cliche deal. But it’s so much hard work, everything that goes in it. They’re selling out their weekends and everything, in the summer, the only nice weather. So when you can culminate with this, it feels like for a reason that it happens. Just the camaraderie and coming together when you win something — it never gets old.”

The season started late due to COVID-19, and many teams jammed more games into each week than they would have in a normal year. And the format for state changed in 2020, with bracket play being single-elimination — something that would have resulted in the Millers missing the title game multiple times in the last six years, instead of playing in it five times and winning four.

“We’ve had a couple duds this year, where we just show up and can’t do anything right. So in the back of our minds, we always knew that was possible,” center fielder and tournament MVP Blaine Rutledge said. “But state tournament time, all our hitters show up, we’re ready to go, everyone’s dialed in. We were able to just battle through.”

The Millers’ depth is a strength, and that lends itself better to a double-elimination format. But with no margin for error, Minnetonka won its first three bracket play games relatively comfortably.

“So I said right away, it’s a crapshoot this year,” Hoy said. “If you give something away in the first three, it could be goodnight. Or you get a really good pitcher who shoves, and you lose a 3-1 game, it’s all over.”

Minnetonka led 6-4 heading to the seventh, but Mason Reinhart walked and Sean Borman was hit by a pitch to end Skoro’s night. Cushing came on and allowed an RBI groundout to Jeff Miller and a sacrifice fly by Jack Hogan to tie the game.

The Millers responded in the bottom of the frame, with Joe Shallenberger and Mike Davis drawing one-out walks and Jack Hanson hitting a go-ahead RBI single. A fielder’s choice scored another run, and just like that, Minnetonka led 8-6.

Minnetonka added another run in the eighth. An error and a single put the first two Cobras on to start the ninth, but Cushing got a strikeout and a double play to give the Millers their first championship since 2017.

The Cobras led 1-0 after half an inning and had pulled back within 4-3 on a Borman two-run homer, but Skoro kept the hot-hitting reigning champions off balance, racking up 12 strikeouts in his six innings.

“I know they can hit, so it’s just a matter of holding them down,” Hoy said. “I thought Tommy did a great job. And I was really happy to have Cushing out there to close it. He’s a Minnetonka kid, he’s a friend of mine, really emotional out there.”

The Millers scored in each of the first four innings, getting two-run homers from Davis and Jarod Wanderbee, and a solo shot from Shallenberger in that stretch — which made it 5-3 after three. Rutledge added an RBI single in the fourth to push it to 6-3.

The game wasn’t quite the offensive showcase that last year’s title bout was — a 16-8 Cobras win — but it still featured plenty of drama.

“It’s what we expected,” Rutledge said. “They’re an amazing team. They’ve got good pitchers, they can absolutely mash the baseball. We just had to keep picking away at them, and we knew it was going to be a dogfight, one through nine, and it turned out to be exactly that. It was a fun way to win, that’s for sure.”

The Millers beat Highland Park 10-3 in the semifinals, Baseball 365 7-3 in the quarterfinals and the Metro Knights 8-2 in the round of 16. The championship kept the Cobras from becoming the first non-Minnetonka team to repeat as champions since the Minneapolis Angels did in 1991-92.

“We were talking, the last 20 or so years, we’ve never lost three years in a row,” Rutledge said. “We’ve lost two years in a row a handful of times, but we’ve never done three. For us, unfortunately, its’ win or bust for us every season. Not winning for two years, this one was big. Get back on the train, let people know we’re not done yet. So it was big, it feels amazing. One of the best ones I’ve dealt with.”

It’s been rare this year that a team slows down the Minneapolis Cobra bats — and even then, they found enough offense and then kept going.

The Cobras advanced to the title game in the Class A State Tournament for the second straight year, fending off Stockmen’s Irish 7-3 Sunday at Palm Field in St. Anthony.

Minneapolis scored the go-ahead run with a bases-loaded walk to make it 3-2 after six innings. Mason Reinhart hit a two-run home run to left in the seventh to push the lead to 5-2.

The Irish went up in the third 1-0 on a solo home run by Brody Paulson. The Cobras took the lead in the bottom of the fourth, with an RBI single by Jeff Miller to tie it, and a run-scoring double play for a 2-1 advantage. Stockmen’s tied the game in the sixth before falling behind 5-2, but got one back in the eighth to pull within 5-3.

Two more runs in the bottom of the ninth made it 7-3 and the Cobras moved on to defend their 2019 Class A title.

A fast start and steady middle of the game helped the Minnetonka Millers return to the Class A State Tournament title game Sunday.

The Millers won 10-3 over the Highland Park Beavers at Palm Field to set up a rematch with the Minneapolis Cobras, who defeated them in the 219 championship.

The Millers held an early 6-0 lead before the Beavers cut the deficit in half with a 3-run top of the fourth.

The Millers scored in the fifth, sixth and seventh innings to go up 10-3.

The Millers lost last year 16-8 to the Cobras in the Class A title game.