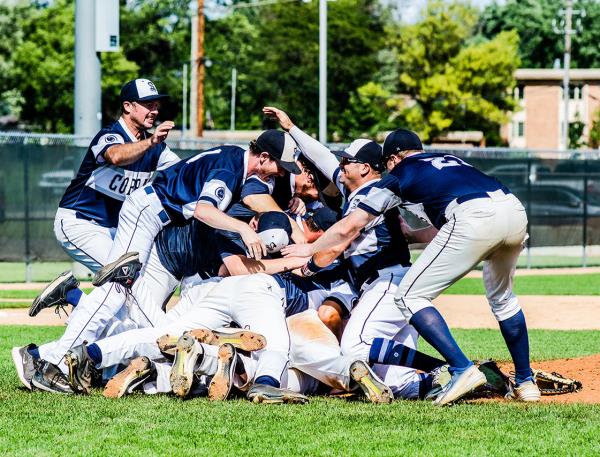 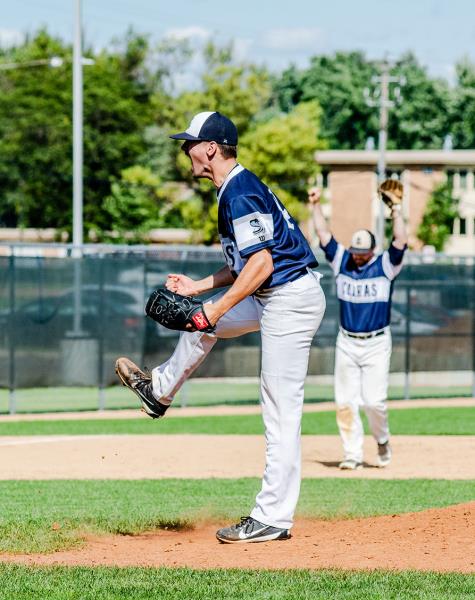 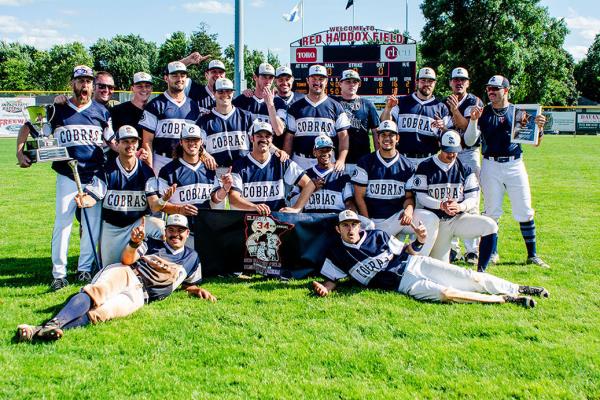 Class A State: Cobras use 'Mustache Power' in topping Millers for championship
Posted on Aug 18, 2019

There was the delivery. Then a swing, a miss, a strikeout.

For a second, it didn’t seem like Minneapolis Cobras pitcher Nate Lutmer realized he just secured the Class A state title for his team. Then there was a fist pump, and then he was mobbed by mostly mustachioed teammates.

The Minneapolis Cobras won a wild 16-8 game over the Minnetonka Millers in the 2019 Class A State Tournament championship Sunday at Red Haddox Field, getting four home runs from a lineup that’s run with the idea of “mustache power,” and 4 2/3 innings of steady relief from Lutmer to secure the team’s first state title.

The teams combined for 20 runs in the first four innings, but the Cobras managed to put together the last big frame, with a five-run fourth to take the lead for good.

The first three Cobras reached in the fourth to force the Millers to turn to Brandon Broxey — who pitched eight innings earlier in the day for Minnetonka. Catcher Jeff Miller delivered a two-run double to put Minneapolis ahead 9-8, part of a 3-for-4 day at the plate. Gabe MacDonald added an RBI single and two more runs scored on a wild pitch and an error as the Cobras went to the fifth up 12-8.

Minnetonka started the fifth with two singles before Lutmer came on in relief, getting three quick outs to end the threat. Lutmer mostly stymied the Millers the rest of the way, allowing three hits and working a 1-2-3 ninth to seal the win.

“We always thought that we were going to be right in it,” Cobras manager/designated hitter Mason Reinhart said. “At the end of the game, we trusted Luddy. He just kind of rocks back and says, ‘Here it is.’”

The game had the makings of a classic from the get-go. Minnetonka scored four in the top of the first, on RBI hits from Eric Fasnacht and Steve Schmitz, plus a wild pitch by starter Danny Smith.

The Cobras responded, putting the first two on before Reinhart hit a three-run home run to left and was followed by a solo shot from Sean Borman that tied the game 4-4. Reinhart and Borman were named tournament co-MVPs. MacDonald hit a three-run homer in the third to make it 7-4 Cobras.

Most of the team sported mustaches for the playoff run, a tradition that started a couple of years ago at the Austin SpamTown tournament. This year, the Cobras didn’t play in the tournament, so Reinhart opted to bring the mustaches in for the postseason.

“Don’t have to look good, but as long as you play good, that’s all that matters,” Lutmer said with a laugh.

Minnetonka came back in the fourth with a two-run single by Ryan Poppitz, a sacrifice fly and a single from Chad Fleischman that put the Millers up 8-7.

The Cobras just kept hitting though, no matter who the Millers put on the mound.

“We got punched in the mouth early, and we battled back,” Reinhart said.

Jack Hemsath had a two-run double in the sixth to push the Cobra lead to 14-8. In the eighth, Cole Easley hit the team’s fourth home run of the day, a two-run shot to straight center field to make it 16-8.

The comebacks that had fueled Minnetonka’s return to the title game weren’t quite there against the Cobras Sunday. The Millers struck late in the morning game to down the St. Paul Capitals 7-6, and came alive in the middle innings the day before to beat the Metro Knights. But the Cobras, who won a winner’s bracket matchup with the Millers 5-4 last week, weren’t about to give Minnetonka a shot at a fourth championship in five years.

“The way we’ve been playing in this tournament, we’re as confident as we can be at the plate,” Lutmer said. “We know what our bats can do, and we know we’re going to come back no matter what happens. Our team plays all year with the attitude you need against a team like that. You stay light, stay loose, have fun. You just can’t get caught up in the moment, which we never do. We’re built for that kind of game.”

Minnetonka finishes second for the fourth time, and wasn’t able to secure a 15th championship. The Millers were third in 2018 and won three straight from 2015-17.

It was the first title for the Cobras, who took second in 2013 and 2000, and finished third place three different times. Reinhart took over as manager a couple of years ago and said the Cobras had a good blend of veterans and younger players. Lutmer, one of the younger guys, appreciated what the players who came before him did to help get the club to this point.

“There were a ton of guys before us that put in so much work,” he said. “It’s for all those guys; they come back and see us all the time. Just to see those guys smiling up there, and see the guys like [Matt] Germar, who’s been around forever — it’s great to see it pay off. It’s a great day.”

Some timely hitting by Joe Shallenberger and Mike Davis got the Millers back to the Class A State Tournament title game.

Shallenberger hit two home runs, including a go-ahead shot in the eighth, and Davis added a pair of RBI hits as the Minnetonka Millers topped the St. Paul Capitals 7-6 Sunday at Red Haddox Field in Bloomington. The Millers advanced to face the Minneapolis Cobras with a chance to win their fourth title in five years.

The Capitals’ Derek Jacobson hit a bases-clearing double to put St. Paul up 5-4 in the top of the seventh. In the bottom of the eighth, Davis drove in Blaine Rutledge to tie the game, and Shallenberger’s second home run of the game made it 7-5, Millers.

Tommy Cummings led off the Capitals’ ninth with a solo home run to make it 7-6, as the Millers turned to veteran Donny Erdall to close the game. Rick Tossey popped out to end the game and send the Millers to a rematch with the Cobras.

Davis’ first RBI hit put Minnetonka ahead 3-1 in the fifth. The Capitals managed one run in the sixth to pull within 3-2.

St. Paul scored on a sacrifice fly to take the first lead of the game, but Eric Fasnacht scored on a fielder’s choice in the bottom of the second to tie the game. Shallenberger’s homer to left put Minnetonka ahead 2-1.

The Capitals finished third at state for the second time in team history.