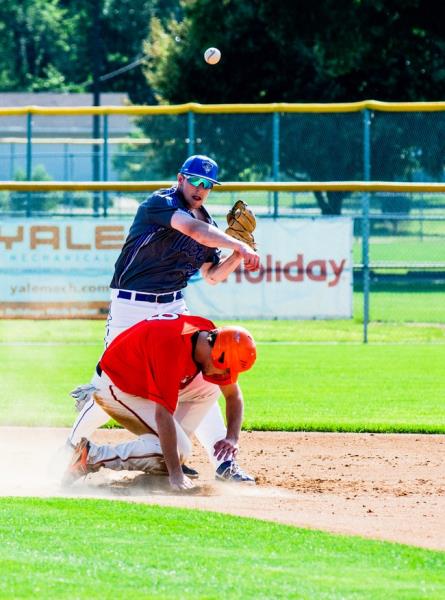 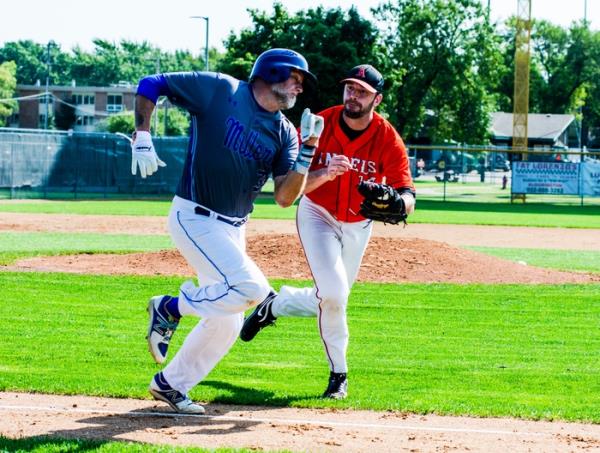 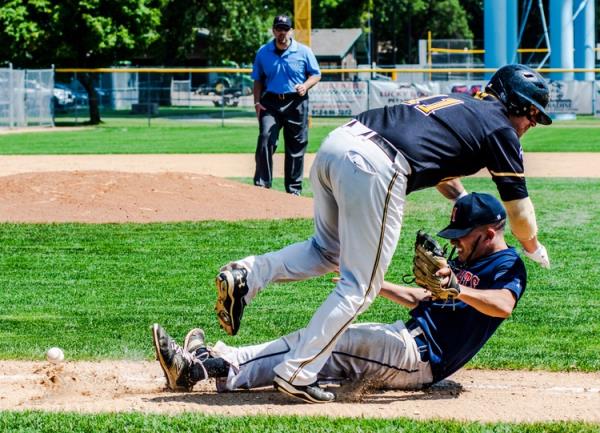 By Adam Holt and Mike Marsnik

Cole DeVries scattered three hits and struck out eight over seven scoreless innings Saturday night to keep his Minneapolis Cobras unbeaten through the winners’ bracket. Jack Hogan added two goose eggs to earn the save in a 4-0 Cobras’ victory over the St. Paul Capitals on Saturday night at Red Haddox Field in Bloomington.

The Capitals got a strong pitching performance from Josh Kubitschek, who allowed only one earned run over 8 2/3 innings. He threw 166 pitches, striking out nine. With no support, his terrific effort went for naught.

The Cobras got two runs in the top of the third. Leadoff hitter Brandon Schmal reached on an error and then Mason Reinhart reached on a swinging bunt to third base. With one out, Jeff Miller singled up the middle to knock in Schmal. Gabe McDonald plated Reinhart on an opposite field sacrifice fly to right.

The Cobras added a pair of insurance runs in the top of the ninth on a walk, a hit and two Capitals errors.

That was the Capitals’ first loss in the tournament. They now face the Minnetonka Millers, who lost to the Cobras at Dunning Field in St. Paul on Aug. 12. The Cobras will play the winner of that contest. Whichever team it is will have to beat them twice to take the Class A title.

The Minnetonka Millers eliminated the Metro Knights with a 7-3 victory Saturday night at Red Haddox Field in Bloomington. Righty Don Erdall allowed two runs over seven innings to notch the win. Shane Rondon and Alex Twenge each pitched an inning of relief. Rondon allowed one run on two hits.

The Knights struck first in the bottom of the third. Carter Shook and Matthew Nunn both singled to lead off the inning. Shook took third on Nunn’s single and scored on a wild pitch.

The Millers took the lead in the top of the fifth, aided by a wild streak from Knights’ starter Josh Gaworski. He walked Steve Schmitz to open the frame, then plunked Chad Fleishman. Conner Trygstad drew a walk to load the bases. Kyle Hoffman reached on an error, scoring Schmitz. Leadoff hitter Blaine Rutledge hit a sacrifice fly to center, knocking in Fleishman, then Mike Davis drove in Trygstad with a single up the middle and the Millers led 3-1.

The Millers added three more in the next inning on a walk and three hits to take a 6-1 lead.

The Knights got one back in the sixth on hits by Josh Thorpe and Henry Laue. With one in, one on, and one out, Trygstad hit a smash back to the box. The liner hit Gaworski in the back on his follow-through and caromed to the area vacated by second baseman Eze Encarnacion. By the time he retrieved it Trygstad was on second with a double and Gaworski was on the grass. He drew applause from the crowd as he remained on the mound.

The Millers tacked on one more in the seventh. With two out, Ryan Poppitz walked, stole second, and scored on a single to left by Eric Fasnacht.

The Millers are set to face the St. Paul Capitals on Sunday morning. The Capitals were shut out by the unbeaten Minneapolis Cobras. The Capitals-Millers winner will need to beat the Cobras twice to claim the Class A title.

A few late insurance runs helped the Metro Knights edge the Lyon’s Pub Warriors 6-2 in an elimination game at the Class A State Tournament Saturday at Red Haddox Field.

Jakob Kouneski had an RBI single in the eighth for the Knights’ fourth run, and Austin Jerylo added his second RBI base hit to push it to 5-2 and chase Lyon’s Pub’s John Spanier from the game with the bases loaded and no outs. Eldon Evans came on in relief and allowed an RBI groundout but got the Warriors to the bottom of the inning down 6-2.

The Warriors loaded the bases with no outs in the bottom of the eighth, but Scott Greening hit into a 5-2-3 double play and another ground ball to short ended the frame.

The Metro Knights scored first, on Jerylo’s one-out, bases-loaded single to make it 2-0 in the top of the fourth. The Knights got another run on a Carter Shook RBI groundout and led 3-0 heading to the bottom of the inning.

A single, fielder’s choice and walk loaded the bases with no outs for Lyon’s Pub in the bottom of the fourth. Emery Hull hit a two-run single, but Metro Knights pitcher Keanu Mendez coaxed a pair of ground balls to end the inning 3-2.

Lyon’s Pub had two runners in scoring position with no outs in the sixth, but Mendez wriggled out of the frame with a strikeout, groundout and flyout. The Warriors put a runner at second with one out in the seventh, but failed to score.

The Warriors had two on with two outs after an error that would have ended the bottom of the fifth, but a leaping catch on a line drive by Knights first baseman Henry Laue squashed the threat.

The teams each had two on and one out setups in the early innings, but failed to score.

The Warriors, the 2018 runners-up, finish 31-8 overall. The Knights advanced to face Minnetonka at 4 p.m.

The Angels knocked off one recent state champion in this year’s Class A State Tournament. They found it more difficult the second time around as the Millers refused to buckle.

The Minnetonka Millers rallied in the middle innings to come back against the Minneapolis Angels 8-2 in an elimination game Saturday at Red Haddox Field in Bloomington. Ben Hughes pitched a complete game to keep the Millers alive.

The Angels beat 2018 champion St. Louis Park in the first round, and early on, looked good against Minnetonka, which won the 2015-17 titles.

Angels starting pitcher Matt Schuld cruised through the first four innings before the Millers strung together a pair of rallies in the fifth and sixth.

Blaine Rutledge gave the Millers their first lead with a solo home run to lead off the top of the sixth and make it 3-2. Mike Davis followed with a single and steal of second, and scored on Zach Trygstad’s single to right. Eric Fasnacht drove another in on a single and Steve Schmitz had a two-run single to make it 7-2 and knock Schuld out of the game.

Minnetonka put the first two on in the top of the fifth, scoring one on a wild pitch. Schmitz hit an RBI groundout to score Eric Fascnacht and tie the game 2-2.

Minneapolis had two on and one out in the bottom of the seventh, but failed to score. A miscommunication on an infield pop up loaded the bases with two outs, but Ben Hughes struck out Connor McCallum to end the threat.

The Angels had runners on second and third with one out in the fourth inning and the Millers intentionally walked the bases loaded. Brady Johnson hit a single up the middle to drive one run in, but the Millers got a ground-ball double play on the next batter to end the inning allowing just one run, a 2-0 game.

A bloop single by Taylor Branstad in the first turned into a run after a sacrifice bunt and two wild pitches as the Angels went up 1-0.

Fasnacht added a solo home run in the eighth for the Millers. Hughes allowed just two runs on 11 hits in his nine innings of work for Minnetonka.

The Angels finish the season 19-16 overall.

The Millers advanced to play the winner of the Lyon’s Pub Warriors and Metro Knights at 4 p.m. Saturday.