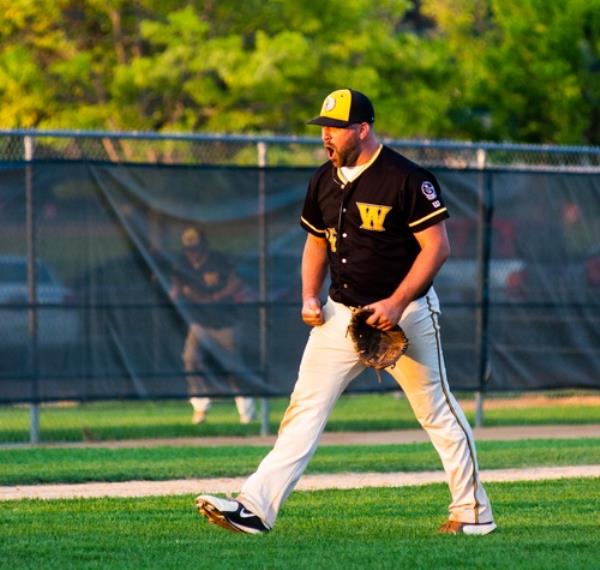 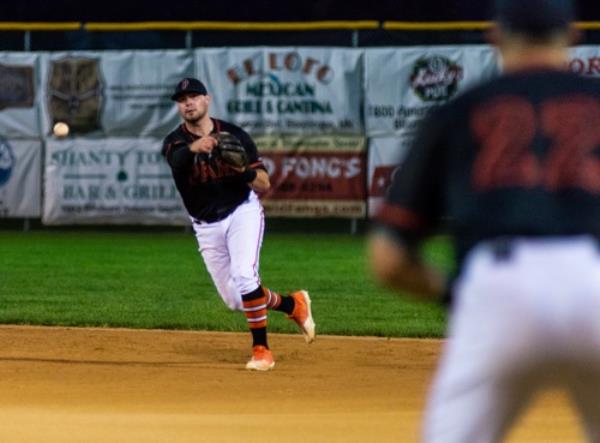 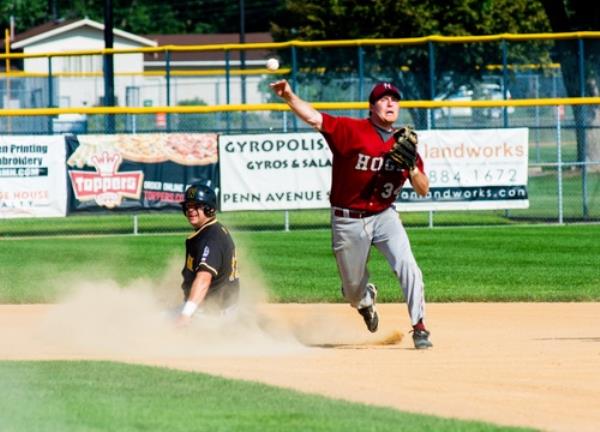 The field was narrowed to six teams at the Class A state tournament Sunday at Red Haddox Field in Bloomington, highlighted by a 13-inning marathon win by the Lyon’s Pub Warriors over the St. Anthony Hogs.

Lyon’s Pub and St. Louis Park remain the lone teams in the field without a loss. Tri-City Shark and the Minneapolis Cobras were eliminated with losses. Minnetonka, the St. Paul Capitals, St. Anthony Hogs and Stockmen’s Irish are still alive.

The Millers almost saw their championship defense end after two games, but stayed alive thanks to Joe Shallenberger and a late Shark error.

Shallenberger hit two home runs and drove in six runs as the Millers came back from a six-run deficit in an 8-7 walk-off victory over Tri-City Shark to stave off elimination Sunday.

Tied at 7-7 in the bottom of the ninth, a throwing error allowed Minnetonka to plate the winning run and stay alive in the tournament.

Shallenberger’s second home run of the day was a two-run shot that tied the game at 7 in the bottom of the eighth. He hit a grand slam earlier to cut into what was a 7-1 Shark lead.

The middle innings were good to the Capitals, who eliminated the Cobras 10-2 Sunday afternoon.

The Capitals never trailed, and scored a combined seven runs in the fourth, fifth and sixth innings.

The Cobras got within 4-2 after the top of the fifth, but the Capitals rallied with four more runs in the bottom of the frame.

St. Paul opened with a three-run bottom of the first. The Capitals outhit the Cobras 14-7.

The Capitals move on and face the St. Anthony Hogs at 1 p.m. Saturday.

The most tense — and longest, thus far — game of the Class A state tournament saw the Lyon’s Pub Warriors win 5-3 over the St. Anthony Hogs in 13 innings Sunday evening. Billy Meister pitched all 13 frames for the Warriors.

Lyon’s Pub finally got to St. Anthony relief pitcher Nick Peterson in the top of the 13th, putting two on and bunting them over to set up an RBI single by Scott Greening. A wild pitch by Alex Sommer plated another run, and Meister worked around a one-out single in the bottom of the inning to close the game.

The Hogs trailed 3-2 after four, but Andrew Johnson tied the game with an RBI single in the fifth.

Johnson was brilliant in relief, coming on in the fifth and pitching eight scoreless innings before allowing the Warriors to go ahead in the 13th.

St. Anthony had the bases loaded with one out in the ninth, but a diving catch in center by Greening and fielder’s choice ended the threat. Ryan Bernardy had a double to lead off the 10th, but was thrown out trying to take third, and the Hogs saw an error and a hit later in the frame.

Lyon’s Pub scored three in the top of the fourth, on an RBI groundout by Brennan Swan and a two-run triple from Rob Schildgen.

The big inning was there again for St. Louis Park, and this time, it was supplemented with some smaller scoring frames.

St. Louis Park scored six in the third, and added runs in three more innings in an 12-3 win over Stockmen’s Irish Sunday night.

Four of the first five batters reached base for Park in the third. Tony Manville and Matt Paulson each had two-RBI hits in the frame.

An error and a wild pitch in the bottom of the frame got the Irish within 6-2.

SLP added one run in the fourth, one in the sixth and three in the seventh — including an RBI triple by Manville. Park also scored in the ninth on an RBI single by Jake Mangler.

Through three games at state, St. Louis Park has 35 runs on 45 hits and has scored four runs or more in an inning six times.